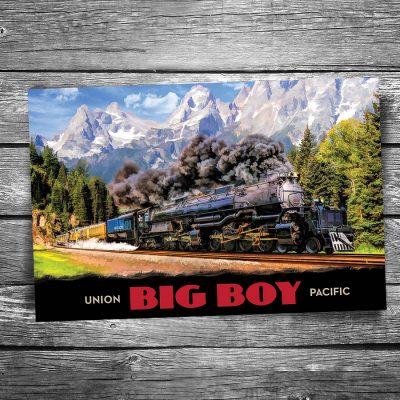 If you are a rail enthusiast, you are probably aware and quite excited about the newly restored historic Union Pacific “Big Boy” steam locomotive No. 4014.

The ultimate expression of American might and power, the 1.2 million pound behemoth is the largest operational steam locomotive in the world.

Built exclusively for the Union Pacific Railroad in the 1940s to pull heavy loads of freight trains across steep grades in Utah’s Mountains and the Rockies—the locomotive lives again.

The multi-year restoration process was completed earlier this year and the Union Pacific is touring the locomotive on its rail system throughout 2019 to commemorate the 150th anniversary of the transcontinental railroad.

Since we already created a commemorative 150th Anniversary Golden Spike postcard earlier this summer, we figured it’s only fitting we have a “Big Boy” postcard too!

PLEASE NOTE | Orders placed today through Sunday will be fulfilled on Monday.LEARN MORE
+
0