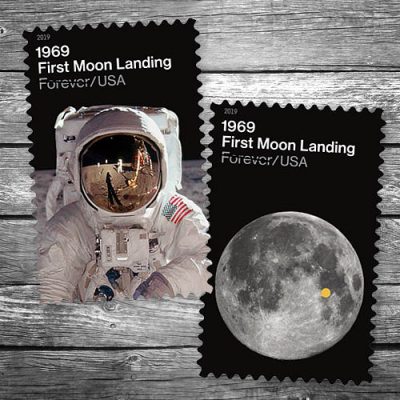 In celebration of the 50th anniversary of the first moon landing on July 20, 1969, the U.S. Postal Service is releasing two stamp designs commemorating this historic milestone.

One stamp features a photograph of Apollo 11 astronaut Buzz Aldrin on the surface of the moon as photographed by astronaut Neil Armstrong.

The other stamp features the Moon and the landing site of the lunar module in the Sea of Tranquility as indicated by the dot.

To coincide with the USPS stamp release, we are excited to provide you with 8 different space postcards to attach your new space stamps to.

How cool is that?